As reported in a recent study by Columbia University, almost 20% of high school seniors reported they’d be more likely to use cannabis if it were legalized for medical use, with 55% of adolescents believing cannabis would be easier to acquire. As a lawmaker, this is cause for alarm. To determine the best course for society, we must weigh the advantages of medical cannabis against possible disadvantages. However, just because teens believe themselves more likely to use cannabis because of medical cannabis laws does not necessarily make that true. Thus, researchers at Columbia set out to conduct a survey to establish the rate of adolescent use both before and after the passage of medical cannabis laws in states that had enacted such programs.

To start with, researchers began with the largest possible data set of adolescents. This survey, called Monitoring the Future, which began in 1991, is a nation-wide continuous survey of adolescents grades 8, 10, and 12 in 400 schools each year. The survey asks a wide variety of health and behavior questions, which can then be used by various research groups to answer statistical questions. Schools participate for two years and are selected at random; schools that choose not to participate are replaced with schools with similar demographics in order to build a cross-sectional look at adolescents in American society. This generates one of the most reliable data sets about adolescents that can be achieved. To prevent fear of punishment affecting students’ self-reporting on questionnaires, responses are anonymous, or confidential in the case of 12th graders. The data was then sorted into groups by state. Finally, this data was compared to medical cannabis law passage in each state via two measures. The first measure, a 1 or a 0, indicated whether medical cannabis laws had been passed any time before 2014 in that state. This was used to compare whether adolescents in states that had ever passed medical cannabis laws were more likely to use cannabis than adolescents in states that had never passed such laws. The second measure was also a number or a “0”, but applied to each year in each state from 1991-2014 to indicate whether a medical cannabis law had passed that specific year (with the number being the year). This measure allowed adolescent consumption before and after medical cannabis laws to be compared. Finally, the group controlled for differences between schools that might affect analysis, such as students per grade, urban vs. suburban populations, and public vs. private schools.

The data indicated two important points. The first, as shown in the figure below, is that states with medical cannabis laws have a higher prevalence of adolescent cannabis use. 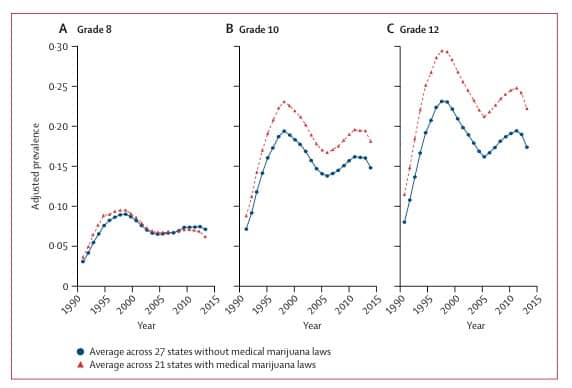 The second conclusion and the most important one to readers is that this prevalence did not change in each state due to passage of medical cannabis laws. 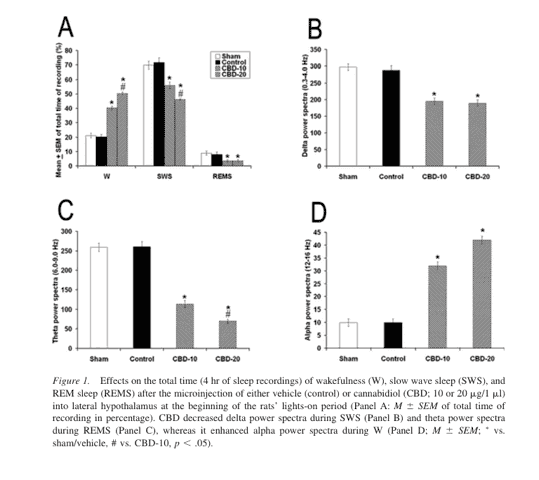 In fact, for 8th graders, it actually decreased by a full percent point, which was determined to be statistically significant. Keep in mind that this study sampled over 1 million adolescents over many different years with many different medical cannabis laws. This finding, therefore, is fairly critical because it effectively relieves lawmakers and citizens alike of the worry that passage of medical cannabis legislation will adversely affect adolescents.

However, researchers wanted to know how “robust” the data was. Were these findings due to the particular way the question was asked? To answer that question, the data was re-sampled in various ways. For instance, upon the suggestion that the physical presence of medical cannabis dispensaries might also affect adolescents’ behavior, researchers created a separate variable with “0” indicating no medical cannabis laws, “1” indicating medical cannabis laws without dispensaries, and “2” indicating medical cannabis laws with dispensaries. In another example, researchers replaced the question “has this student used cannabis at all?” with “how frequently has this student used cannabis in the last month?”. Researchers also created a variable to allow for lag in effects from laws. Finally, the data analysis was conducted 48 times removing one state each round to ensure that no state had an unusually large impact on the results. In other words, researchers cut this study to shreds, trying to find any source of error. As it turned out, none of these methods changed the observed conclusions significantly.

This is usually the point where we caution readers from accepting the results of a study at face value. However…not today. Today we have the pleasure of informing you that after reviewing the data, we are convinced beyond reasonable doubt that medical cannabis legislation does not affect teen’s likelihood of using cannabis. Instead, it appears that the overall culture and political climate of each state determines this rate and that the medical cannabis laws are a reflection of those climates, rather than the other way around.