Late Onset Alzheimer’s Disease (LOAD) is what most people think of when they think of Alzheimer’s. Accounting for roughly 70% of dementia cases, it’s characterized by a progressive decline in cognitive ability in individuals over the age of 65. This decline affects memory, language, motor skills, and general ability to live and take care of oneself. However, while these symptoms are troubling enough, LOAD also frequently includes behavior and personality changes. Coordinating healthcare is already difficult enough for a relative with a myriad of age-related health issues, but when that relative is unable to remember basic instructions or able to have a coherent conversation, the situation is exponentially more difficult. Taken together, all of these changes put significant stress on the individuals suffering from the disease as well as the family members and healthcare workers taking care of those individuals.

Unfortunately, not much is understood about the cause of Alzheimer’s. Instead, we have a fragmented understanding of processes that seem to be related. For instance, research currently indicates that neuroinflammation and oxidative stress play a vital role in the development of the disease. Specifically, the build up of cell waste related to aging can turn toxic, forcing the brain to initiate a sequence of processes, known as a “cascade”, in an attempt to surround and isolate the toxicity. Unfortunately, this process alone can release even more cytokines, chemokines, and proteins, which eventually leads to more inflammation, resulting in neuron death. As with many diseases, treating LOAD means preventing the body from over-reacting to an abnormal situation.

Obviously, without fully understanding the cause of the disease, researchers have had a difficult time developing anti-LOAD medication. Current treatments include medications that attempt to treat symptoms of the disease (as opposed to the cause), by limiting the inflammatory molecules that are able to build up. A more novel approach that is gaining traction is stimulating the immune system to actively clear out build up of cell waste in the brain. In this case, researchers use weak antigens to stimulate the immune system, which is essentially what happens when a vaccine is administered. This approach has been successful in reducing the build up of cell waste in the brain; however, it has not been successful in reducing the cognitive decline of individuals with LOAD, which suggests that clearing the waste is not enough to stop the spread of the disease. One concept of the disease is that once it has progressed past a certain phase, patterns have already been set in motion that have nothing to do with the original cause.

Not surprisingly, cannabis and cannabis-based medicines have emerged as a potential new medicine for LOAD for several reasons, as identified by a recent review study published by the American Society for Clinical Pharmacology and Therapeutics: 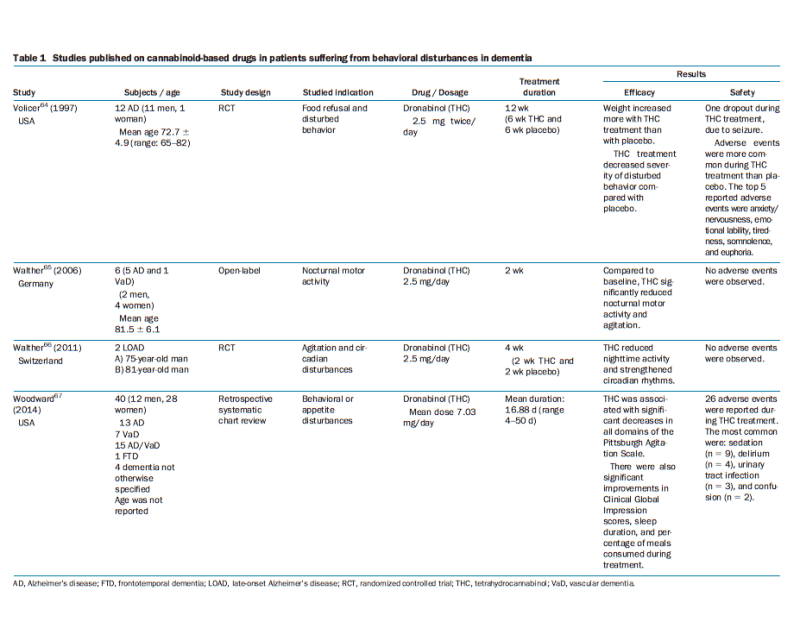 In previous articles, we’ve discussed the neuroprotective effects of cannabis use, as well as the ability of cannabis to limit cytokine inflammation, which is thought to be one of the causes of neuronal degeneration. However, as indicated above, the real win-win of cannabis use in patients with LOAD arrives in the form of age-related issues. In 2011, for instance, researchers in Switzerland studied agitation and circadian disturbances in elderly. Circadian rhythms can be described as the body’s “internal clock”, which allows your body to know when to sleep and how to regulate energy most efficiently. Unfortunately, elderly often suffer from disturbances in these rythms, feeling tired during the day and sleepless at night. In this study, Dronabinol (pure THC), given for a two week period, “reduced nighttime activity and strengthened circadian rhythms”, with absolutely no adverse events being observed.

Likewise, in 2014, American researchers studied behavioral disturbances in 40 patients with dementia. Behavioral disturbances in people with LOAD may include aggression, wandering, pacing, and general agitation, which gives rise to the image of LOAD seen in the general media of a lost and confused elderly person. A dose of Dronabinol averaging 7 mg/day resulted in “significant decreases in all domains of the Pittsburgh Agitation Scale”, which is a scale to assess behavior issues resulting from dementia. In this case, the only adverse side effects observed are also general effects of LOAD, so it stands to reason that some patients have conditions that are less treatable than others.

Finally, an older study from 1997 addressed food refusal in patients with Alzheimer’s. In this case, patients with a lack of appetite reject food and as a result, fail to receive vital nutrients. Patients were given THC in a total of 5 mg daily for six weeks, with another six weeks of placebo. Readers may laugh at the rather obvious conclusion of this study, which was that cannabis increased appetite compared to placebo medications and was indicated to increase weight in patients refusing food who would otherwise be wasting and not receiving substantial nutrition.

As cannabis becomes more widely accepted and available in the United States and the developed world, we can expect to see more clinicians experimenting with cannabis as treatment for LOAD. Several large questions now loom on the horizon, the most important being whether the observation of decreased endocannabinoid system activity in elderly is a cause or an effect of neural degeneration. However, due to the absence of harmful side effects seen in other medications, cannabis can be seen as a relatively safe component of any treatment plan, especially in smaller doses.

Facts and Myths of Schizophrenia and Cannabis
Scroll to top