The endocannabinoid system might be one of the most fascinating and most complex regulatory systems of the human body. Unlike many other areas of medicine, where basic domains of influence are well established, the endocannabinoid system represents an open, unsettled territory for bold researchers. New effects mediated by the system are being discovered constantly and in some of the most unlikely places. Effects are not limited to activation or deactivation of cannabinoid receptors alone. The system has shown itself capable of affecting the body through other side routes, as exhibited by CBD, which has numerous therapeutic qualities yet a surprisingly low affinity for either type of cannabinoid receptor.

As is the case with most scientific research, new questions often arise from unexpected results from other experiments (think post-it notes arising from super glue research). In the case of bladder research, the first studies to indicate that cannabis might be helpful in relieving overactive bladder stemmed from studies of multiple sclerosis (MS) patients. MS can frequently lead to bladder spasms and other incontinence issues as muscles deteriorate. Patients using Sativex (a popular extract of cannabis) noted reduced urinary urgency and number of incontinence episodes. This observation lead to a multi-center study involving over 600 patients who self-reported reduction of bladder issues while taking Sativex.

While results of the survey indicated a reduction in problems, self-reported studies are only meant as initial inquiries because they are subject to bias, differing standards, poorly-defined language in questionnaires, etc. However, this study none-the-less encouraged researchers to begin objective testing. One such research group, from the University of Naples, has concentrated on testing the contractility of bladder tissues directly. After removing bladders from both rats and human bodies, researchers cut strips of the bladder tissue and placed these in baths of organic fluid while stimulating the tissues to contract and observing the effect of adding cannabis-based extract. The reasoning here is that, because most over-active bladder issues are caused by premature contraction of the bladder, an effective treatment would be one that limited bladder tissue contraction.

While this is a simple premise, one point of complication stems from the issue that bladder contraction in the body is not a simple on/off switch. Although bladder tissue contracts in response to electrical stimulation, this stimulation can be driven by either direct electrical impulse or through chemicals released into the bladder. These chemicals are understood to signal to the bladder when the correct “time to go” is. As a result, researchers set up a variety of contraction-stimulating systems, including electrical stimulation via electrodes, acetylcholine, alpha-beta-methylene adenosine triphosphate, and potassium chloride (worth noting here, acetylcholine is thought to stimulate the majority of bladder contraction within the human body). When the tissues are first stimulated, some abnormal contraction occurs. However, as tissues continue to be stimulated, regular patterns form and the tissue reaction stabilizes to a predictable pattern. After waiting for observable patterns to be established, researchers applied cannabis sativa extract enriched in CBD (referred to by the group as BDS) in slowly increasing concentrations to the tissue baths. The results were mapped to graphs and shown below:

Graph of bladder contraction inhibition with a variety of contraction stimuli during application of CBD-enriched cannabis extract (BDS) in rat and human tissue respectively. 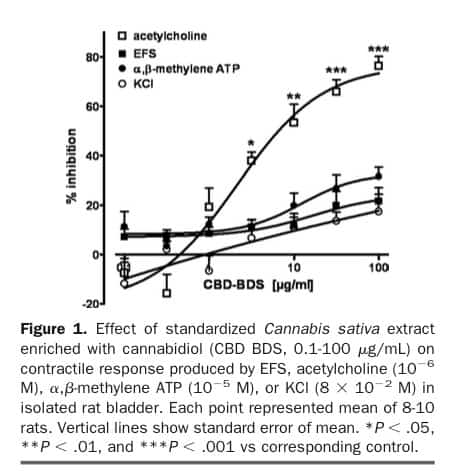 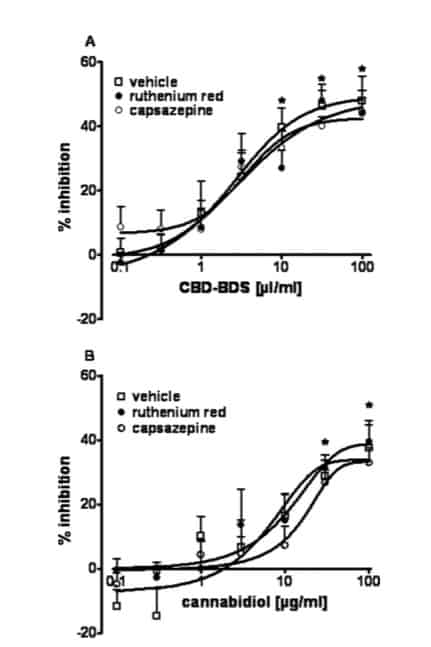 As seen, in virtually all cases and in both rodent and human tissue, the CBD enriched extract (CBD-BDS) showed at least marginal improvement in bladder contraction inhibition. However, the most observable effect, and the real significant finding of the study, occurred during bladder stimulation occurring specifically from acetylcholine. For this type of bladder contraction stimulation, percent inhibition of contraction increased with concentration of CBD-BDS applied. Obviously, if this holds true in-vivo (in actual living organs within the human body), this could represent bladder issue relief for countless patients. Furthermore, since other methods of contraction were not significantly affected, we can conclude that the cannabis extract is not causing a depressant effect on the tissue in general or making the tissue less responsive as a whole.

The specific cause of this effect is still in question. By also administering cannabinoid receptor antagonists (receptor blockers) in the follow-up experiment, researchers were able to confirm that these positive effects persist regardless of cannabinoid receptor action. However, beyond knowing that the effect of CBD is not stemming from direct receptor activation, we really have no idea how contractions are being stifled. This particular research team speculated a variety of potential pathways, ranging from indirect receptor activation to opioid receptor activation and specific ion channels related to bladder functioning. However, these are educated guesses at best and cannot truly be evaluated until further research is produced. Regardless, what we’re seeing here is another window of potential healthcare treatment opened by cannabis and specifically CBD. Although treating bladder issues with cannabis may have been laughable just 15 years ago, as research stands, this idea may now be fairly close to becoming a reality.