Close to 8% of men and women worldwide are affected with diabetes mellitus, commonly referred to simply as “diabetes”. The disease ranges in severity and symptoms but is often crippling, making it the 8th leading cause of death worldwide whilst rendering the comparatively more fortunate portion of patients with a multitude of harmful symptoms that impair daily life. While the underlying cause of diabetes centers around insulin production, cannabis has shown promise in improving the general climate of the disease, as well as attenuating various side effects. The following article will focus on a general review of evidence surrounding these new discoveries.

For readers not familiar with the causes of diabetes, the most important concept to understand is how the body regulates blood sugar. Blood sugar is the free amount of glucose (sugar) available to cells from the blood. It is one of the main sources of cellular respiration; however, at high doses can be toxic to the cells that rely upon it as an energy source. As the body gleans nutrients and energy from the food and pumps those into the bloodstream, blood sugar levels rocket. However, the human body cannot perform reliably with rapidly shifting levels of energy, so the body flattens the blood sugar spike back down to normal levels by releasing insulin, a chemical that encourages glucose to be stored in muscle and fat tissues for later use. (See graph of uptake below). 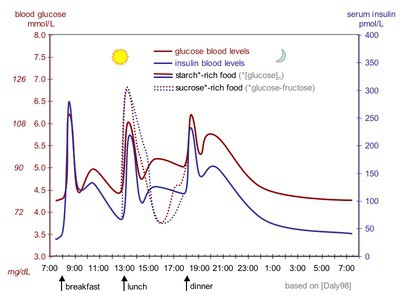 Two common types of problems can occur with this system, which both result in diabetes. The first, Type 1 Diabetes, occurs when not enough insulin can be produced, which results in prolonged elevated glucose levels. For this type of diabetes, patients are required to inject additional extraneous insulin to regulate their conditions. In Type 2 Diabetes, the cells have essentially begun to ignore the insulin, which means the situation must also be treated with medicine. Unfortunately, blood sugar levels being elevated for too long results in poisoning of the body. The most physically apparent symptom is uncontrollable, life-shortening weight gain caused by increased hunger from the body not receiving correct signals of having enough energy. However, patients also deal with serious cardiovascular disease. In fact, 75% of diabetes patient deaths are due to artery disease, and likewise, amputations are often necessary when limbs are not being pumped enough blood as a result of a failing vascular system. Finally, glucose poisoning can cause blindness in what is known as “diabetic retinopathy”, as well as long-term kidney damage that can sometimes require dialysis or replacement. Threatening weight gain can be treated with weight-loss surgery and healthy diet, but these other symptoms are difficult to alleviate.

So what does cannabis have to do with any of this? As it turns out, quite a lot. For one, cannabidiol (CBD) has been shown to attenuate cardiac dysfunction and oxidative stress that occurs in the heart as a result of what is essentially imbalanced metabolism. One research group, noticing CBD’s anti-inflammatory effects, induced diabetes in mice and then administered CBD in various increments and over 4 week and 8 week time periods. During this program, they measured heart function directly through blood pressure and monitoring of blood flow volume through the heart, as well as oxidative stress through standard biochemical techniques involving testing levels of metabolic markers from the blood. As seen in the graph below, mice administered CBD operated at a lower blood pressure for a given volume of blood flow.

Likewise, researchers showed a decrease in accumulation of lipid peroxides, proteins, and other chemicals that cause inflammation and stress the body by releasing “free radicals”, which are break-off groups from chemical interactions that serve no real purpose and damage the body. This evidence suggests that heart dysfunction resulting from diabetes may be reduced by cannabis use.

In another area of diabetes symptoms research, a group of physicians and researchers connected to the Medical College of Georgia found that CBD can help preserve the blood-retinal barrier (BRB), which is a tissue that prevents harmful substances from entering the retina from the blood. In diabetic patients, a permeable membrane lets in unwanted substances bound for other areas of the body, which leads to eye cell death and eventually blindness. Researchers treated diabetic mice with CBD daily for 4 works to compare permeability of the blood-retinal barrier in treated mice with a group of untreated mice. At the end of this CBD treatment program, they injected the mice with a fluorescent compound and dissected the retinas of each mouse. By measuring the luminescence of these retinas, they could then measure how much of the chemical was getting past the barrier.

The results are included below, pictured both as photographs of luminescent eye tissue and as graphs of calculated fluorescence. “GCL”, “IPL”, “INL”, and “ONL” stand for various layers of the retina shown in the retina cross sections pictured. 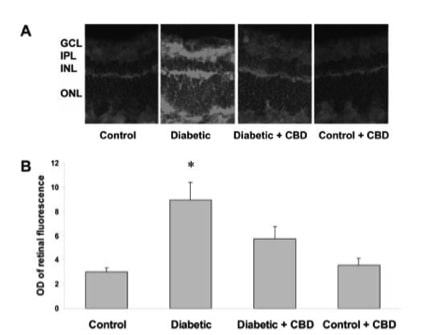 As seen, the diabetic mice treated with CBD shown almost a 40% decrease in barrier permeability. This means that CBD treatment is quite possibly capable of preventing long-term eye damage stemming from diabetes and greatly elongating the vision of diabetic patients.

As always, we must be cautious to interpret mouse data as applicable to human conditions, which are usually (but not always) similar. However, in both cases of major side effects of diabetes, CBD has been shown to attenuate symptoms. Additional evidence is mounting that CBD can arrest the onset of certain types of diabetes completely, although this evidence is less repeatable and should be looked at more as an indication of where future research may possibly lead. Combined with the data that cannabis usage can lower blood pressure, however, it seems very likely that cannabis usage, specifically CBD intake, benefits the average diabetes patient. 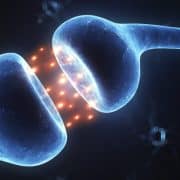 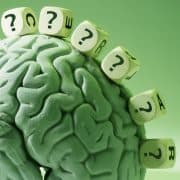 THC May Help Break Down Harmful Memories
How Cannabinoids Can Beneficially Interact with Neurodegenerative Disorder ...

To Vape or Not To Vape
Scroll to top