Cannabis has long been known to be a mood improving substance. In fact, this quality has contributed to its use as a recreational drug. As a result, it’s not surprising to read that the endocannabinoid system, which controls our bodies’ responses to cannabis, is being investigated in connection to treating depression. What is surprising, however, is the specific way it seems to be involved. Readers might never suspect that the immune system and the endocannabinoid system might be cohorts in the genesis of depression.

Wait, back up – the immune system? What does that have to do with depression? Apparently something large. First, recent meta-analyses of immune-related experiments provide strong support for a link between immune dysfunction and depression. Statistically speaking, patients with major depressive disorder (MDD) also show higher levels of several inflammatory signaling proteins. While this could simply indicate association rather than cause (for instance, simply that patients with malfunctioning immune systems have health consequences that lead to depression), the most interesting evidence here is that researchers have specifically observed a positive relationship between depressive symptoms and amount/dose of inflammatory molecules over a widespread population. The fact that depressive symptoms are dose-dependent to immune signaling molecules seems to suggest some sort of causality. Finally, patients suffering from chronic viral infections, who as a result have to take drugs like IFN-alpha (an immune and inflammation boosting cytokine), often develop depression at the onset of such medication with a rate upwards of 30 percent!

Unfortunately, depression comes in many forms with many potential multiple causes, both biological and otherwise, which makes pinning depressive symptoms down to a particular cause difficult. However, since we also know that challenges to the immune system can affect brain function through pathways such as microglia (immune cells located in the central nervous system and brain), we can guess that the inflammation/immune system model of depression has some validity. Of course, this is where cannabis gets involved. One of the most vital medicinal aspects of cannabis comes from its anti-inflammatory effect. In the past we’ve featured numerous articles that focus on this particular quality, from reducing the pain of arthritis to dampening the rate of autoimmune disease. In both cases, activation of endocannabinoid receptors, particularly the CB2 receptor, leads to a decrease in inflammation. Likewise, irregular function of the endocannabinoid system has been observed to play a role in depression. Mice without CB1 cannabinoid receptors show increased symptoms of depression, while mice with increased activation of CB2 receptors have been shown to exhibit lower levels of anxiety.

At this point, readers may see the connection being drawn; if cannabis and the immune system are both involved in the development of depression independently, are they also involved together? In other words, how do these systems talk to each other and how might one influence the other in regards to depression? Are anti-inflammatory effects one of the pathways through which cannabinoids reduce depression?

Researchers are just beginning to ask these questions. In fact, this year, the Institute of Psychiatry at King’s College London reviewed papers involving the immune system, the endocannabinoid system, and depression and afterwards took a stab at evaluating the potential cooperation between all three.

To examine the “crosstalk” or interaction between the systems, we can start by observing how one system is capable of influencing another, one way at a time. In the direction of endocannabinoid signaling influencing the immune system, the pathways are numerous. Activation of CB2 receptors can directly lead to the reduction/uptake of immune system response molecules, such as tumor necrosis factor (TNF-alpha) and the interleukin-1 (IL) group of molecules. Additional pathways exist, such as through the intermediary molecules known as eicosanoids, which are affected by cannabinoid receptors themselves, as well as through channels that do not involve those receptors at all (such as in the case of the anti-inflammatory properties of cannabidiol).

In the opposite direction, immune system cells seem to be capable of influencing endocannabinoid system signaling as well. For instance, macrophages, which are immune cells that attack, eat, and dissolve foreign cells, are also capable of producing both AEA and 2-AG, the body’s natural equivalents of THC and CBD! Immune cells can also uptake and degrade those molecules as well, meaning that the immune system can control the amount of natural cannabinoids present in a given tissue.

Finally, research indicates that beyond affecting each other on a local immune level, both systems appear to interact within the brain. As mentioned earlier, endocannabinoid signaling affects microglial immune cells in the brain. Specifically, these cells have two major states, M1, which is a pro-inflammatory state designed to limit attack by pathogens, and M2 which is neuro-protective and healing. Recent studies have indicated that activation of the CB2 receptor helps transition microglial cells to the M2 state, which is important, since cells that over-express the M1 state can cause self-destruction of the brain’s pathways. Whether the state of microglial cells affects depression directly is unclear, or at least available research is limited. However, again, we have a case where both systems are involved at once in determining actual brain layout.

Perhaps the greatest takeaway from modern medicine is that all of the body’s systems are interconnected. Changing one system inherently affects another, and negative health effects often come in groups as opposed to one by one. The interaction observed between the endocannabinoid system, the immune system, and major depressive disorder seems to be a great example of that interconnectedness and how difficult it makes answering research questions. At the present, we stare at an incomplete puzzle, with the knowledge that somehow all three are involved and actively balancing each other to keep individuals healthy, happy, and otherwise fulfilled. 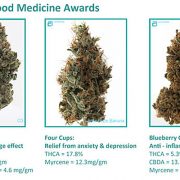 Schizophrenia, Cannabis, and the AKT1 Gene
Scroll to top