Christine Skibola Ph.D. is a former UC Berkeley professor and a leading international cancer researcher, pursuing her passion helping those with cancer and other chronic illnesses through lifestyle and dietary changes and holistic approaches. Christine and her daughter Nicole’s brand Cosmic View provided Cornerstone a little scientific insight to cannabinoid acids and female reproductive health.

Cosmic View’s Inner Balance is a CBD/CBDA-rich herbal tincture aimed at supporting women’s health through various stages of life to address issues such as menstrual pain, anxiety, depression and hot flashes.  The herbs contained in Inner Balance are also aimed at addressing women’s issues including pain, inflammation and hormonal imbalances.  Olive leaf and nettle exert antioxidant and anti-inflammatory actions.  Passion flower has been widely used to treat depression and anxiety since ancient times.  Crampbark naturally contains a compound called methyl salicylate, which is known to have pain-relieving and anti-inflammatory effects. As its name hints, cramp bark is known for relieving cramps, including those associated with PMS.

Women with dysmenorrhea (painful menses) and endometriosis have higher levels of pro-inflammatory prostaglandins that stimulate uterine contractions and result in debilitating pain. Prostaglandins are produced with the help of cyclooxygenase enzymes (COX-1 and COX-2). CBD and CBDA can inhibit COX enzymes and thereby reduce the production of prostaglandins that can ease menstrual pain (see Costa B., et al.  Arch. Pharmacol., 369, 294-299 (2004).  Takeda S.et al., Drug Metab. Dispos., 36, 1917-1921 (2008).  CBD, THC and their acidic precursors have also been shown to inhibit pro-inflammatory molecules involved in chronic pain conditions and cancer. 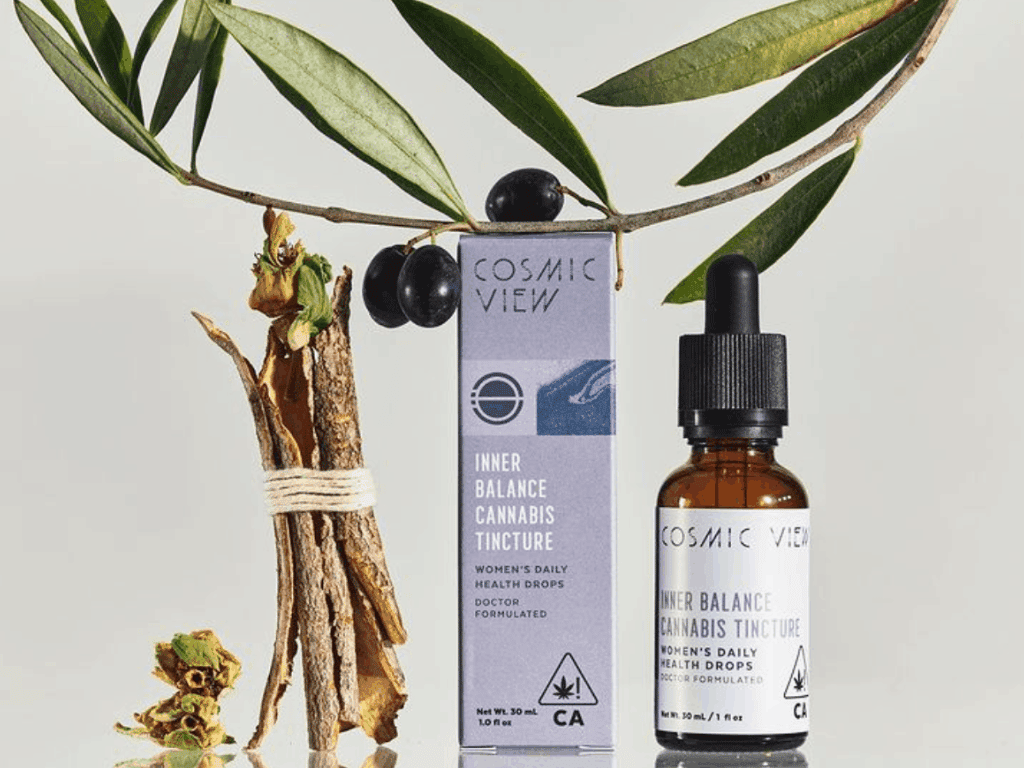 Our favorite mighty cannabinoids, prominently featured in Cosmic View’s Inner Balance Tincture boasts some new promising research. Inner Balance is a 5:1 acid-rich formula with ample CBDA and THCA, as well as other calming and immune boosting botanicals — nettle, olive leaf, passionflower and cramp bark. Here are some moments from the highlight reel of cannabidiolic acid (CBDA) and tetrahydrocannabinolic acid (THCA), the precursors of CBD and THC — delightfully medicinal and non-psychoactive!

A growing body of experimental evidence has been shown to reduce levels of cyclooxygenase-2 (COX-2) in several recent studies.  COX-2 is an enzyme that is responsible for the production of prostaglandins during inflammation and is a key enzyme involved in inflammatory conditions and chronic pain diseases such as endometriosis. COX-2 expression is also upregulated in certain cancer cells, including breast cancer cells, and is associated with enhanced tumor growth.  CBDA has been shown to interfere with COX-2 expression in MDA-MB-231 breast cancer cells and inhibit cell growth.  MDA-MB-231 is a highly aggressive triple-negative breast cancer cell line.  More studies will be needed to determine the effects of CBDA on inflammatory diseases including cancer in a clinical setting. J Toxicol Sc. 2020;45(4):227-236.

In a recent report using a mouse model of arthritis, investigators found that mice treated with THCA were protected from the deleterious effects of arthritis.  THCA prevented inflammatory cells from entering the joints and producing swelling and cartilage damage. THCA’s anti-arthritis effects were mainly mediated through CB1 receptors and PPARγ pathways.  (More to come on PPARγ and THCA.)  The researchers highlight the potential for THCA in treating chronic inflammatory diseases such as rheumatoid arthritis. Palomares B et al.  Δ9-Tetrahydrocannabinolic acid alleviates collagen-induced arthritis: Role of PPARγ and CB1 receptors.  British Journal of Pharmacology. 177(17); 2020.

Another recent study in mice and THCA was conducted in Spain. The mice had increased body weight, fat mass, insulin resistance (they were diabetic). They also suffered from fatty livers. The researchers found that after a 3-week treatment with an effective daily dose of THCA, the mice exhibited reduced body weight and fat cells, and had significantly lower basal glucose and insulin levels. The THCA also fully prevented glucose intolerance and insulin resistance. Circulating triglyceride levels were also reduced and liver scores were substantially improved following treatment. In addition, adverse hormonal and inflammatory cytokine profiles caused by the high fat diet were reversed by THCA. Interestingly, the beneficial effects of THCA were not only observed in animals fed a high fat diet, but also, to a lesser extent, in lean animals fed a control diet.

THCA did not cause any detectable change in food intake, compared to THC, which enhances appetite. The researchers concluded that THCA causes browning of white adipose tissue, and this activity could mechanistically underlie at least some of its beneficial effects on energy and metabolic balance. THCA, as well as non-decarboxylated Cannabis sativa (CBDA) extracts, should be considered in the management of obesity and metabolic diseases. Palomares et al. Tetrahydrocannabinolic acid A (THCA-A) reduces adiposity and prevents metabolic disease caused by diet-induced obesity. Biochemical Pharmacology, 2020. PMID: 31706843.