We’re living in exciting times; human knowledge of cannabis, cannabinoids, and the endocannabinoid system is surging. If the sheer number of medical journal papers related to cannabis/cannabinoids is any indication, more researchers than ever are choosing to invest their lives and energy in exploring the subject. This, in turn, has allowed individual threads of research to unfold much more rapidly. As would be expected, the findings of one seemingly unrelated study often inform and develop the findings and questions of another.

For readers that would rather a digested version, the basic idea is that the endocannabinoid system can control and alleviate inflammation by reducing the number of inflammatory molecules produced by the body. MS, in particular, is a disease in which the body’s immune system becomes confused and starts destroying healthy cells in the brain. If the brain can be pictured as a giant mass of neurons wired together in a network, MS destroys the outer lining of those wires, causing electrical signals to be released improperly or not at all. This process, at the time being, is not reversible or curable but is capable of being slowed. Patients with MS can live long lives, albeit with increasing disability and discomfort.

Previous studies have shown that cannabinoids, in particular CBD, the strongest anti-inflammatory molecule in cannabis, can delay MS development. However, the real question here is: can MS be stopped?

In answering this question we first must understand the signaling that triggers MS, the idea being that if we can stop the signal from being broadcast in the first place, we also stop MS. As a result, researchers have invested time in studying MS through animal models. These models are, of course, not perfect replications of naturally occurring MS. However, one model, Experimental Autoimmune Encephalomyelitis (EAE) has proven fairly accurate and particularly useful in studying MS, to the point that it may be regarded as a standard model. In the EAE model, mice are injected with myelin oligodendroglial glycoprotein peptide (MOG). This sets off a chain reaction that causes the destruction of myelin lining (the material that wraps nerve fibers). To identify what signals may lead to that destruction, scientists measure various chemicals during the onset of disease. Any spikes in active forms of those chemicals, up or down, might indicate that that particular chemical pathway has a relationship with EAE.

Based on such work, Italian researchers have identified the Pl3K/Akt/mTOR pathway as a research target for MS. The Pl3K/Akt/mTOR pathway is a cell-signaling pathway that helps control the cell cycle. Cell cycle, in turn, controls cell regeneration, longevity, cancer growth, etc. This research group, noting previous studies in which cannabinoids were shown to affect the Pl3K pathway, decided to specifically test CBD in regards to Pl3K activity in MS development.

To do this, researchers began by inducing EAE (the MS animal model) in otherwise healthy rodents twelve weeks of age. Perhaps unsurprisingly, the onset of MS is gradual even in the artificially induced model. However, two weeks later, the mice began to show signs of the disease, evident from hind limb paralysis and weight loss. At this point, researchers divided the rodents in two groups, a group without treatment, and a group given CBD injections (10 mg of CBD per kg body weight). The CBD injections were prepared from CBD extracted from hemp to ensure absolutely no traces of THC or cannabinoids that might bias the study results. A third group, composed of rodents that received neither EAE induction nor CBD injection, formed a control for researchers to compare results. Finally, 28 days from the EAE induction, the animals were euthanized with an injection of Tanax (a common veterinary euthanizing agent), and “spinal cord tissues were sampled and processed in order to evaluate parameters of disease”. These parameters included a clinical disease score that seeks to objectively measure signs of EAE, as well as chemical analysis to determine Pl3K activity.

As seen in previous experiments, EAE mice showed a down-regulation of the Pl3K/Akt/mTOR pathway. In the graphs below we can see measurements of the phosphorylation of all three proteins (which indicates activity). Notice that in all three graphs, the EAE measure is lower than the “naive” measure (naive being the control group of mice with no EAE and no CBD). 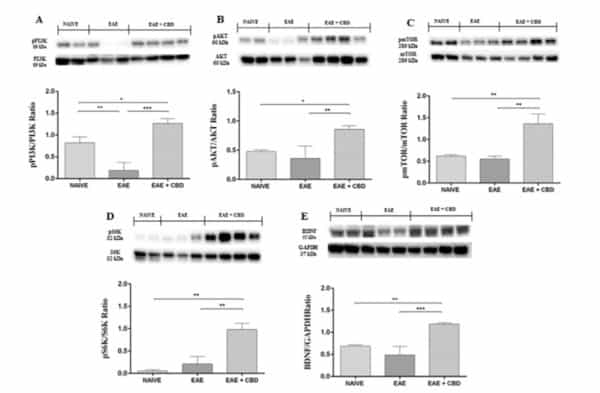 However, readers will also notice that in each case, the group that received CBD after EAE onset, labeled “EAE + CBD”, expressed even higher activity than normal! In other words, the CBD not only counteracted the change brought about by the MS animal model, it also improved general activity.

Why does that matter? By quantifying disease development, researchers were also able to establish that lower levels of pathway activity generally coincide with greater disease progression. Assuming that the drop in activity brought on by EAE can be prevented, the symptoms of MS should also decrease dramatically. This was, in fact, also confirmed by analyzing disease progression in mice given CBD. The CBD group illustrated less paralysis, less loss of muscle mass, and less loss of body weight.

While we try to remain cautious about new research, this evidence is particularly compelling. To be fair, this body weight/dosing ratio constitutes a dosing challenge in humans (it would be difficult to reach through cannabis flower preparations). However, even if it should turn out that there is more to the story in terms of the Pl3K pathway, the bottom line is that CBD is once again, attenuating an animal MS model. At Cornerstone, we feel increasingly confident recommending CBD preparations (especially high concentration extracts) to MS patients. 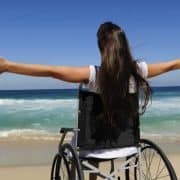 Cannabis Use and Executive Function
Scroll to top